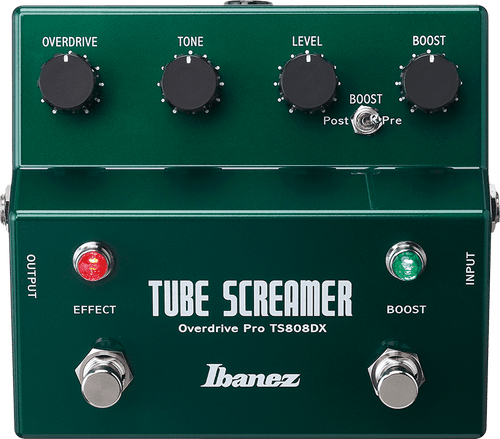 For over 30 years the Ibanez TS808 Tube Screamer has been one of the most popular overdrive pedals in the world. The unmistakable little green stomp box has been a perennial favorite, cherished by rocks most celebrated guitarists for it's warm, creamy tone and unequivocal responsiveness. Now Ibanez has expanded the palette of "The Screamer" with the new TS808DX.

Simply put, this new version is two pedals in one: A true TS808 Overdrive, featuring the JRC4558D IC for that signature soft, subtle clipping sound, and a boost circuit, capable of adding up to 20db at the tap of a switch. The pedal incorporates two individual, true bypass switches for total independent control, allowing the Overdrive and the Booster to be used separately or in conjunction with each other. Add the Boost for a few extra db while playing through the Overdrive circuit, or just engage the booster on its own for that little extra lift while playing clean.

A toggle switch allows for the choice of placing the Boost Pre or Post the Overdrive section and a rear panel switch offers the option of 9-volt or 18-volt operation, Its the Screamer you know and love, taken to a whole new level.