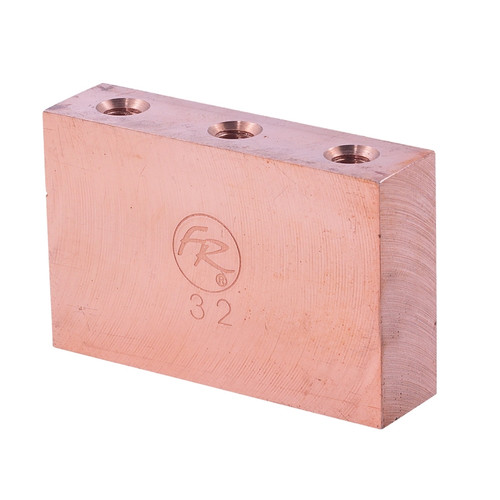 the exclusive fat tungsten sustain blocks for Floyd Rose tremolo bridges offer the highest density available in a block that conforms to the original size specifications of ythe Floyd Rose bridge. When it comes to sustain, the single most important property of a metal is density followed by hardness. Tungsten is over 4 times denser than titanium and more than twice as dense as brass. To equal the mass of the tungsten sustain block, you would need a titanium block 4 times the size and a brass block double the dimensions of the tungsten block.

Most standard tremolo spring cavities simply aren't large enough to accommodate bulky sustain blocks sold by other companies. thes is a direct replacement for the stock sustain block adding up to a half pound of mass to ythe bridge.

Why are density and mass important to sound and sustain? A fixed guitar bridge efficiently transmits string vibration from the bridge to the body through a large contact area but tremolo bridges are limited by a few very small attachment points. A great deal of resonance is lost to the bridge through the tremolo springs because the springs absorb and dissipate vibration very well. This is one of the reasons expensive studio microphones are suspended by springs to isolate external vibrations. A high density sustain block means greater mass which means less string vibration transmitted to the springs and more in the bridge where it belongs.

Soft metals absorb sound and cancel sustain. Tungsten is much harder than steel and titanium and over twice as hard as brass. No other sustain block offers the perfect combination of mass and hardness.

With the tungsten sustain block, every note will be brighter with a noticeable increase in clarity and sustain.

Since this block is larger than a conventional sustain block, it can also limit upward travel of the tremolo and can be set to rest against the body in a blocked bridge configuration. For floating bridge setup this block may require some routing in the spring cavity.